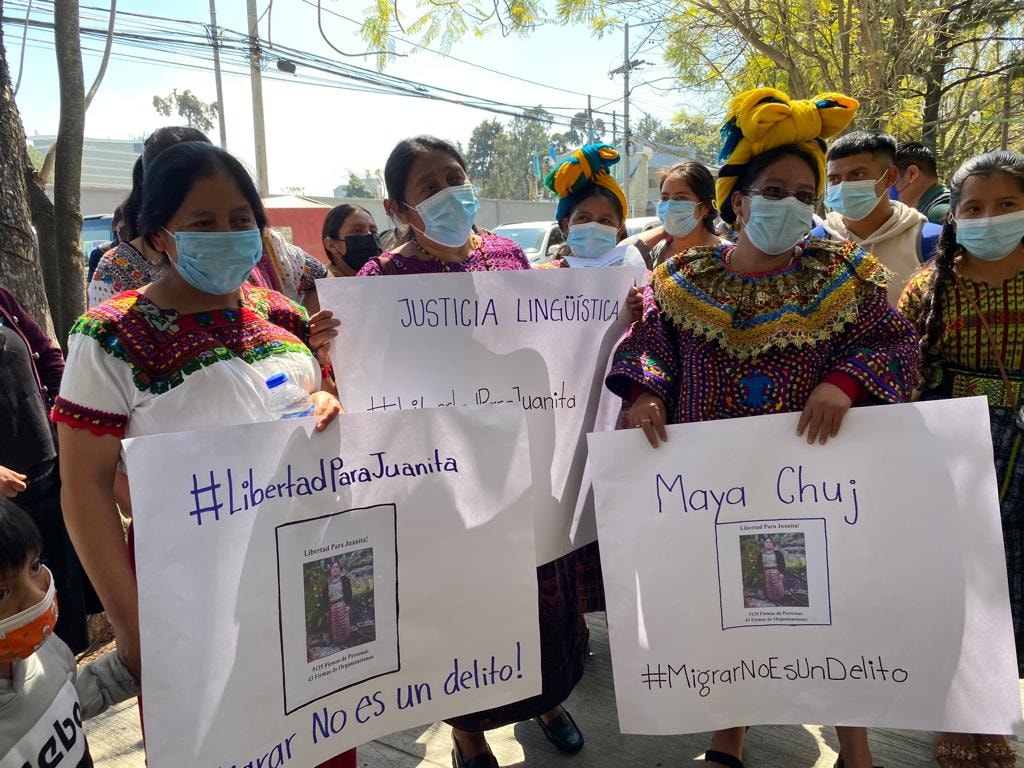 Get ready for upcoming actions on February 21st and March 8: details below!

The letter demands the release of the Maya-Chuj migrant Juana Alonzo Santizo, who was detained and discriminated against by members of the Mexican security forces in the state of Tamaulipas, tortured and interrogated without legal representation, without consular support and without an interpreter to help her understand proceedings in Spanish, a language she did not speak. After seven years detained without due process and without a sentence in the prison of Reynosa, Tamaulipas, the Working Group on Arbitrary Detention of the Human Rights Commission of the United Nations published a decision (#35/2021) regarding Juana’s case, saying that “the detention of Juana Alonzo Santizo is arbitrary,” and asking the Mexican government to “immediately release Ms. Alonzo Santizo and grant her the effective right to obtain compensation and other types of reparation.” You can read the full letter here: https://forms.gle/RFRC9XXrcBoCFKpY6

The delegations asked that Marcelo Ebrard and the Mexicano Ambassador in Guatemala, Romeo Ruiz Armento, respond within 15 days to confirm that they will receive a delegation of women, family members, Maya-Chuj neighbors and members of the Promotoras de la Liberación Migrante on March 8th at the Mexican Consulate in Quetzaltenango.

Several of Juana’s family members participated in the delegation in Guatemala City, where they arrived at 10am in front of the Mexican Embassy. At first several officials came out to see what the mobilization was about, and a few minutes later Abel Escartín Molina, head of foreign affairs of at the embassy, came out as well. He explained that he represented the ambassador Romeo Ruíz Armento, but was unfamiliar with the case, and had never heard of Juana, but that he would happily take the document and send it where it needed to go. Several times, Mr. Escartín Molina tried to convince Juana’s family members to go to the Guatemalan Foreign Ministry instead of demanding answers from the government of Mexico. When members of the family insisted that they were asking for answers from the Mexican government because they are the ones who have Juana in prison, he took the document and promised to send it up to the Secretary of Foreign Affairs. Journalists from Prensa Comunitaria, Prensa Libre, Radio San Mateo, the Federación Guatemalteca de Escuelas Radiofónicas, and other media accompanied the delegation.

Afterwards the delegation went to the offices of the Guatemalan Foreign Ministry to leave them a copy of the letter they had presented to the Mexican embassy. The Guatemalan officials restricted entry to only 3 members of the delegation, but, perhaps because of the coverage of the campaign in top Guatemalan newspaper Prensa Libre the previous week, which resulted in a formal press release from the Foreign Ministry on Monday January 24th, they did invite representatives of the family delegation into the Consular Affairs offices, to speak with director Ricardo Girón and subdirector Eduardo López while the majority of the family had to wait on the sidewalk. After asserting that they have assisted Juana during the more than seven years she has spent in arbitrary detention, the Guatemalan government representatives said they would be in communication with the Guatemalan consulate in Monterrey to follow up on the case and they would notify the family about any advances.

On the same day, in Washington, DC, our compañeras at the International Mayan League presented the letter and signatures to the Mexican Embassy. They described their experience like this:

Today, when representatives of the Mayan League went to the Mexican Embassy, we were not allowed in and were met by a consultant who did not give her name when asked, and did not allow for video taping of the presentation of the letter. However we took photos and will be following up with Ambassador Esteban Moctezuma Barragán; Guillaume David Michel Blin, Consejero, Jefe de Asuntos Jurídicos, and; José Francisco Anza Solís, Consejero, Jefe de Asuntos Hispanos y Migratorios . The Government of Mexico is accountable for the human rights violations of Sra. Juana. Please continue your solidarity for Juana’s immediate release and to fully investigate the circumstances of her arbitrary detention.

The letter was also delivered in Mexico City, at the office of the Secretary of Foreign Affairs, Marcelo Ebrard Casaubón. The letter’s reception was formally stamped and ifficials committed to delivering it to the Secretary:

The same week, our compañera Andrea, a student at Georgetown University, took initiative to deliver a copy of the letter to the Mexican consulate in Los Angeles, the city where she was born and raised. At first officials didn’t want to take the letter without a prior appointment but when she said she wouldn’t leave unless they formally received it, the consulate’s representatives accepted it and committed to delivering it to the Ministry of Foreign Affairs.

While we await a response from Secretary of Foreign Affairs Marcelo Ebrard Casaubón and his ambassador in Guatemala, we are preparing the next steps of the campaign: during the week of February 21st, Juana will be in hearings in Reynosa, where the Attorney General’s office has promised to review her case. We plan to launch a digital mobilization campaign that day so that all of our allies can participate- prepare a photo or video with a sign that says #LibertadParaJuanita (#FreedomForJuana) and publish it on social media on February 21st along with thousands of others to demand her release on the day of her hearings! You can tag Secretary Marcelo Ebrard on Twitter (@M_Ebrard), Facebook (@MarceloEbrardC), or Instagram (@marcelo.ebrard) or even send him an email at canciller@sre.gob.mx

Donate to the Mobilization on March 8th!

Also, on March 8th, we are supporting a delegation of women from San Mateo Ixtatán who will be traveling 10 hours from San Mateo Ixtatán, Huehuetenango to the Mexican consulate in Quetzaltenango for International Women’s Day. Help us cover their mobilization costs by donating and sharing the Facebook fundraiser here: https://www.facebook.com/donate/924697031767848/

To communicate with PLM to help out with the campaign, write us at info@liberacionmigrante.org , on WhatsApp at +502 3215 0918 , or on our social media accounts.